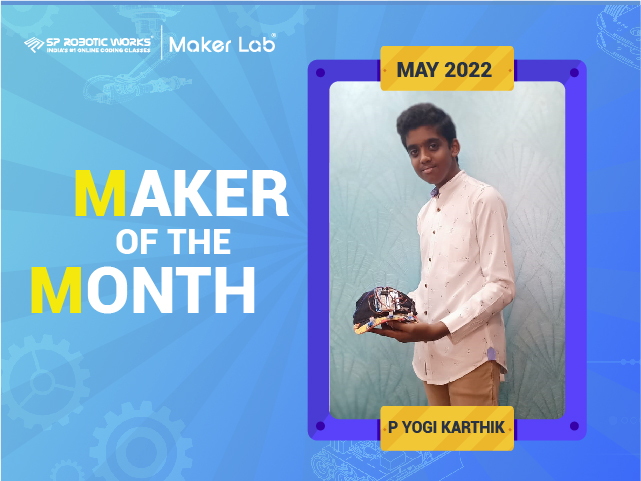 Another month has gone by, and it's time for the Maker of the Month blog, in which we will announce the next enthusiastic and imaginative maker from SP Robotic Works community for the month of May 2022.

After considerable discussion and observation of your entries, we have chosen a maker whose inventions stood out from the throng, and the distinction of Maker of the Month for May 2022 goes to none other than P Yogi Karthik.

P Yogi Karthik is a Bangalore-based online student who is active in our community and constantly generates new and innovative projects. Since a young age,he has been captivated by the latest technological advances, particularly motors, sensors, batteries, and LED. He began studying about Arduino and programming a year ago and is now capable of developing any new Arduino-based projects.

"The field of robotics is expanding enormously in nearly every industry, including military, health care, education, and agriculture," Karthik adds. He is an enthusiastic student who excels in academics and extracurricular activities at school too.

In his spare time, he likes building robots, computing, and playing chess, among other things. He came in third place in a robotics competition at his school. Smart Cap, which assists blind people, is his favourite project since he created a gadget that can guide blind people and assist them in avoiding any obstacles while travelling.

Karthik's favourite SP Robotic Works course is the Codey Inventor Kit, in which he learned about Embedded C programming and creating robots. In the future, he want to be recognised as an Automation Engineer and to create and develop his own vision of robots.

Let's have a look at some of his amazing projects!!!

So do you want to be the next Maker of Month?

Here are the 4 easiest steps to be followed if you wish to win the award:

Step 1: Be active in the SPRW Community & App

SPRW conducts various contests via its app and facebook pages. Regularly check the SPRW app and the SP Robotics feeds page in the website & facebook page for all conducted contests and events.

Well, this is the fun part. Just build robots according to the criteria specified in the problem statement. Well, you are also welcome to display your creativity in terms of the features or components used in the robots. If you make maximum use of the components from your kits, you get special brownie points during the selection process.

Step 3: Shoot the Robot- with a camera!

Well, your robot needs to be evaluated by us for you to win. So, take a video of the robot and its features and compile them into a short crisp video. Since it is going to be a monthly event, you are supposed to stick to the deadline. Oh yes, we almost forgot! Share the video with us. Just ensure that the videos shot in a well-lit environment for the robot to appear in its resplendent form! Also make sure you have submitted 3 or more self projects within the span of 30 days

This is the hard part. We know you will be bristling with excitement after submitting the video. We also appreciate that you will be eager to know how you fared. But, you gotta wait until we screen through all the submissions and finally declare you the winner! As local governments across cities and states are taking action to stem the rapid rise in cases of Covid-19, certain restrictions are being put in place that impact delivery and warehouse operations also in certain Pin-codes.

Most of these impacts are small this time and we are working to ensure a smooth and delightful delivery experience for our customers, nevertheless there might be some delay in delivering orders in certain pin codes.

But most orders will be delivered in the stipulated time frame as we are working to further strengthen our backend logistics.

Please be patient and reach out to us on info@sproboticworks.com or call us at 1800-121-2135 for the latest on your order information