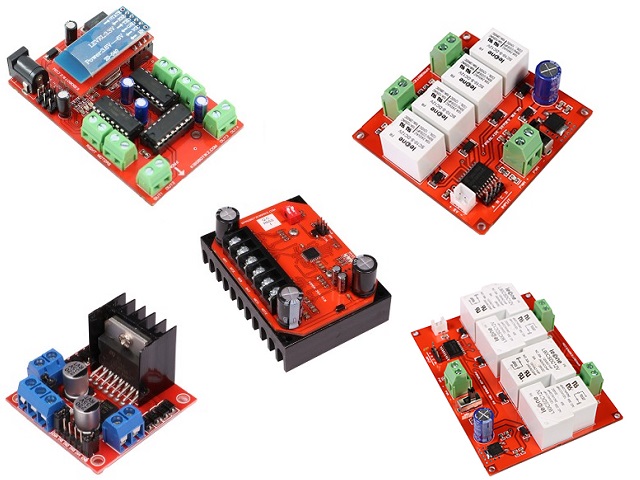 In the field of Robotics, we have different types of motors such as DC motors, Servo motors, stepper motors etc. Selection of motors depends on your application and there are various ways to operate them.

Some motors can be controlled directly by various methods such as connecting the power supply directly to them and make it work. But what if we want to control these motors using other controller devices such as Wireless systems, microcontroller, etc. we need something known as MOTOR DRIVERS

What is a Motor Driver?

Motor drivers acts as an interface between the motors and the control circuits. Motor require high amount of current whereas the controller circuit works on low current signals. So the function of motor drivers is to take a low-current control signal and then turn it into a higher-current signal that can drive a motor.

To control the robot wirelessly through a remote controller we need to interface the motors with the wireless systems such as Bluetooth, 2.4 GHz Rf modules, etc.

Whereas the Viper Board can be interfaced directly with both Microcontrollers as well as 2.4 GHz Remote controllers. Along with it, this board is also a speed controller board that means it allows you to control the speed of motors while the Fireblade series is a not having this feature.

Autonomous robots are controlled basically by a Micro-controller. As mentioned above the Fireblade and Viper Motor drivers can be used to interface with Microcontrollers. Apart from these there are  a few more low current motor drivers such as L293D , L298N

L293D is used in various shields like Auton Shield, Xbee Shield, Starter Shield as it is best suitable for low current motors such as BO motors commonly used in small autonomous robots.

L298N board is a dual motor driver which can help you interface motors which draw upto 2 Ampere of current such as BO motors and Basic Gear motors.

For interfacing motors which draws HIGH current we can choose Fireblade series - Fireblade 10A and Fireblade 30A (Non Speed Controlled ) or Viper motor driver ( Speed Controller ) according to your application.

Click Here to get more details about these Motor Drivers